The wind blew strong through the night but dropped slightly in the morning. The wind at least had dried out the balance of my gear including my tent.

Tent tucked into corner for shelter from flax

Didn't see any penguins but there was a beautiful sunrise over the bay and a low tide allowed me to check out the Petrified Forest. 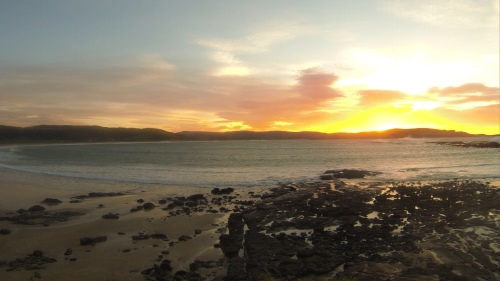 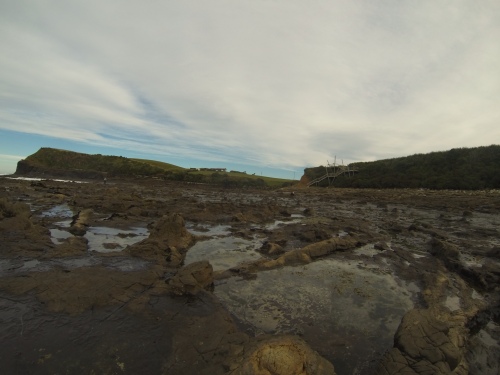 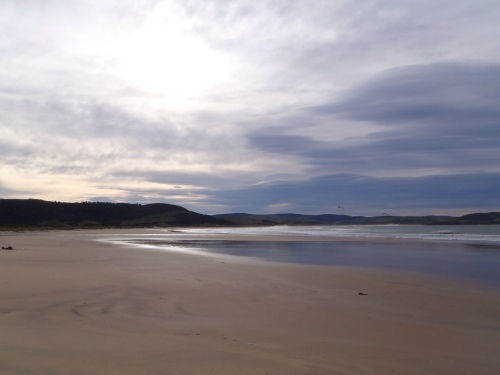 The beach at low tide

I decided it was not safe to carry on to Slope Point (the Southern most point on the South Island of New Zealand) as I could not ride in the high winds on an unpaved road. Therefore considered options for continuing onward. I pushed out a French traveller who had become stuck in the mud and found out he was heading towards Dunedin with a few stops on the way including Nugget Point (next to where I started my ride). I considered catching a ride as this would allow me to catch the train to Middlemarch and carry on via the rail trail. Another traveller however who had just finished the rail trail suggested that the trail, while having minimal gradients, was still quite exposed to a the wind and most travelled the trail from West to East. I did not want to give up a day or more of biking so I carried on from my present location, first North and then West on the Southern Scenic Route.

The ride to Dunedin that I passed up. Time will tell if that was the right decision

Travelled directly into the wind for much of the day though the intensity was quite variable depending on the terrain. The wind was worst while cresting a hill or passing any obstruction. I once again did not make as good a progress as hoped, spending a surprising amount of time in my lowest gear and having to stop even to take a drink of water. I had a couple of close calls where I took one hand of the bars and was then caught but gust of wind so kept it safe kept my hands on the bars. There was limited traffic and have yet to be passed by a large truck.

One good thing brought by the change in weather was a clear sky and warmer temperatures which meant I spent the entire day in a short leaved shirt and shorts. I believe the temperature topped 20 C.

I arrived at Fortrose with a couple of hours of daylight remaining, but with no other known prospects for camping within range, decided to spend the night. No cell phone coverage and no pay phones but the restaurant let me use their phone to check in with Thea. I was able to get local advice based on the marine weather forecast and their conclusion on the best route to end up in Fiordland was to carry on along the Southern Coast. I also hoped that this route would have limited traffic as that was one thing I wanted to avoid.

I had a choice of free camping in the local campground without any facilities other than toilet or renting a caravan for $20. I went with the caravan to allow me to recharge my electronics and have a shower. This appears to have been a wise choice as the rain started shortly after I settled in. The camper was older but quite spacious with a fridge and radio. The shower was modern and located in a separate building.

Caravan I rented for night